We started the day at coastline of Scheveningen at The Hague. In the previous weeks they where working on the beach pumping sand to the beach for coastal protection. These activities attracted many gulls including some Iceland en Glacous Gull. Sadly due to maintainance the gulls where all far out on the water and it turned out that it would take the whole day before the machines where running again. Sadly no Iceland of Glacous could be found only a Caspian Gull with the large number of Herring and Greater Black-backed Gulls. Some Sanderlings and Turnstones where also foraging along the shoreline and Purple Sandpipers where present on the pier.

We descided to head to a nearby lake Starrevaart where there's a hide which turned out to be good for taking photos and stay out of the rain. The four Glossy Ibis turned up every hour on the small island to rest for a couple of minutes before heading back to their foraging streams at the nearby meadows. A female Smew was present on the lake among some Goldeneyes. Besides these ducks there where the ever present Wigeon, Gadwall, Pintails and Mallards. Some Teal and Tufted Ducks already had spring feelings chasing the females around allowing us to take some flight shots. When we walked back a Bittern crossed the path but quickly disappeared in the reeds not to be found.

After the skies cleared we headed east into the fields near Zoeterwoude looking for geese. We did find some mixed flocks of Greater White-fronted Geese, Barnacle Geese and Greylag Geese but they where to far out for taking any photos. A large flock of Starlings whre flying around but didn’t showed the real murmaration even when a Sparrowhawk passed by.

The next site we visited at Noordwijkerhout was good choise. The Goosanders where still present and where fishing, displaying and even mating in front of the hide. Large numbers of Tufted Ducks and Teals where present and the light conditions where perfect. As the light faded we headed to the beach at Katwijk. The light was perfect and there where lots of birds feeding on the shells that washed ashore. They where so focussed on the food and allowed us to come close. Often the Sanderlings where within 3 meters. When the sun was setting the clouds coloured supurb and often the calling Herring Gulls flew in the exact spot. 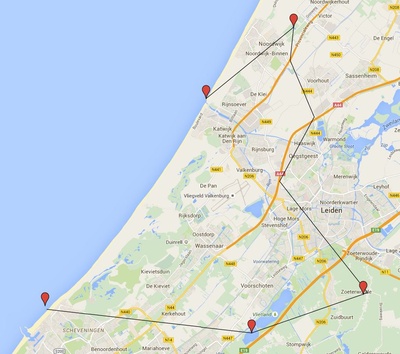