16th of April 2016. Recon birding trip to the province of Noord Holland.

On April 16th our guides Maarten and Menno spend a full day birding in the province Noord-Holland the check several locations for an upcoming one and a half day-tour for Birding Netherlands. The weather conditions weren't the most ideal with a strong wind from the west (5-6 bft), several rain showers and now and then the sun broke through the clouds. Due to these conditions there wasn’t any bird migration neither the past night as this depression keeps lots of spring migrants stranded in southern and eastern Europe waiting for more ideal conditions.

We arrived at 07:30 at Petten and stopped over along a reedbed. Here we heard singing Bluethroat, Sedge Warbler and in the nearby meadows two Northern Wheatears were present. Some local Yellow Wagtails, Meadow Pipits and Barn Swallows flew overhead. As we drove along the dike we ticked Black-tailed Godwit, Whimbrel, Curlew, Spoonbill and a hunting Peregrine off the list. A Marsh Harrier was bullying a Buzzard and within a group of White Wagtails we found a couple of Pied Wagtails including a stunning male.

At the recently restored reserve we counted many Sandwich and Common Terns, Little- and Common Ringed Plover, two Spotted Redshanks with one in stunning summer plumage with next to him a Greenshank. Not to mention the many Avocets. A view over the sea resulted in many groups of Black Scoter and Greater Black-backed Gulls. The wind wasn’t favorable for songbirds but as we slowly drove along the dunes with the windows open we heard Chiffchaf, Willow Warbler and a Sparrowhawk flushed two Wood Larks.

While heading north we stopped over some recently created nature reserves and added Little Egret, Turnstone, Shoveler to the list and a nice group of five Ring Ouzel flew over but decided to go back from where they left. As we arrived at Den Helder we crossed over to the Wadden Sea side to check some new sites. Here we added Eider, Dunlin, Snipe and Common Sandpiper to the list.

We headed east to Den Oever driving over the local roads stopping to overlook interesting sites. By doing this we found a couple of Grey Partridges and come across groups of Dark-bellied Brent Geese. Within these groups we found three White-bellied - and one Black Brent. From the car we saw large groups of waders flying over the Wadden Sea dike which turned out to be Bar-tailed Godwits. As the water was rising at the Wadden Sea we found in these groups of waders Red Knots and Sanderling which were new for the day-list. A female Hen Harrier flew by and in the harbour we found a male Red-breasted Merganser and a adult Little Gull.

From Den Oever we follow the IJsselmeer back towards Amsterdam. Ten minutes of driving and we were looking at a pair of Garganey, Marsh-, Wood- and Green Sandpiper while we heard Bearded Tits calling from a reedbed. Within the large flocks of resting Tufted Duck we saw about 30 Greater Scaup

Just before we saw the skyline of Amsterdam we saw several Mediterranean Gulls in the meadows were many Black-tailed Godwits are present. A male Marsh Harrier flew beside our car, we drove ahead of him and stopped over. A couple of seconds it came cruising by at eye level over the reeds, a nice end of the day that resulted in 106 species of birds! 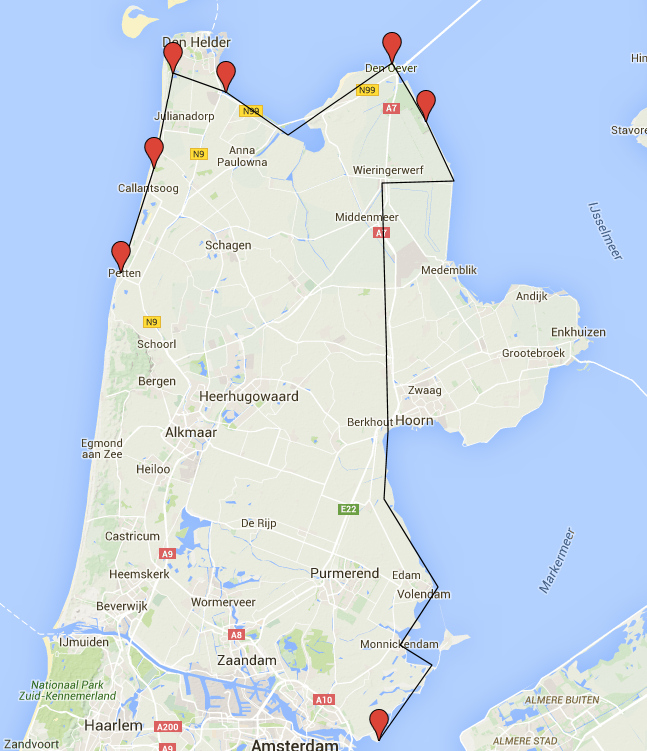