After David and I met at Schiphol on the 26th of March we drove north to look for geese in the province Noord Holland mainly for ringed geese as David is a fanatic ringer with a special interest in Brent Geese. Even so special that he asked Birding Netherlands to arrange a full week on the Wadden Island Terschelling.

After a tourist stop to take some pictures of the flowering Narcis fields with old windmills we found a flock of Greater White-fronted Goose, for the Dutch standard a relative small group as the majority of birds already left their wintering ground but to British standards this was a massive flock. In the streams we saw a couple of Great Egrets and Spoonbills foraging and on the wet grassland a couple of Ruff where foraging.

We scanned the group hoping for Lesser White-fronted Geese which also visit these fields when they migrate north but we weren’t lucky. While scanning the flock Black-tailed Godwits where chasing eachother and a Skylark’s song filled the sky. Despite the strong wind Meadow Pipits, Yellow and White Wagtails passed by on migration and Avocets where busy with their courtship down the dike on the artificial breeding islands.

We went to Den Helder to look for Brent Geese. The group was out on the North Sea foraging on seaweed and seagrass which made it a bit difficult to find ringed birds. We did found one only it has lost one of the rings. At the east side of Den Helder we stopped for a small group of Brent which come to rest inland with the high tide with the waders from the Wadden Sea. Along with Pintails, Teals, Redshanks, Dunlin, Avocets and a Knot the Brent weren’t wearing rings so we continued our way more towards the IJsselmeer.

Here we found a group over 3.000 Brent Geese and found a couple of ringed birds, including 2 White-bellied Brent and at least 2 Black Brent, the third might have been a hybrid as it wasn’t so striking as the other two. Beside the Brent may Lapwing where breeding and Black-tailed Godwits and Redshanks where displaying.

By now we had to leave to catch David’s ferry to Harlingen which we managed to get on the last minute. On the 30 kilometer long IJsselmeerdijk from Den Oever to the province of Friesland which forms the boundery of the fresh water IJsselmeer and the salt Wadden Sea, we saw 5 Goosander and two Red-crested Pochard between the hundreds of Tufted Ducks. 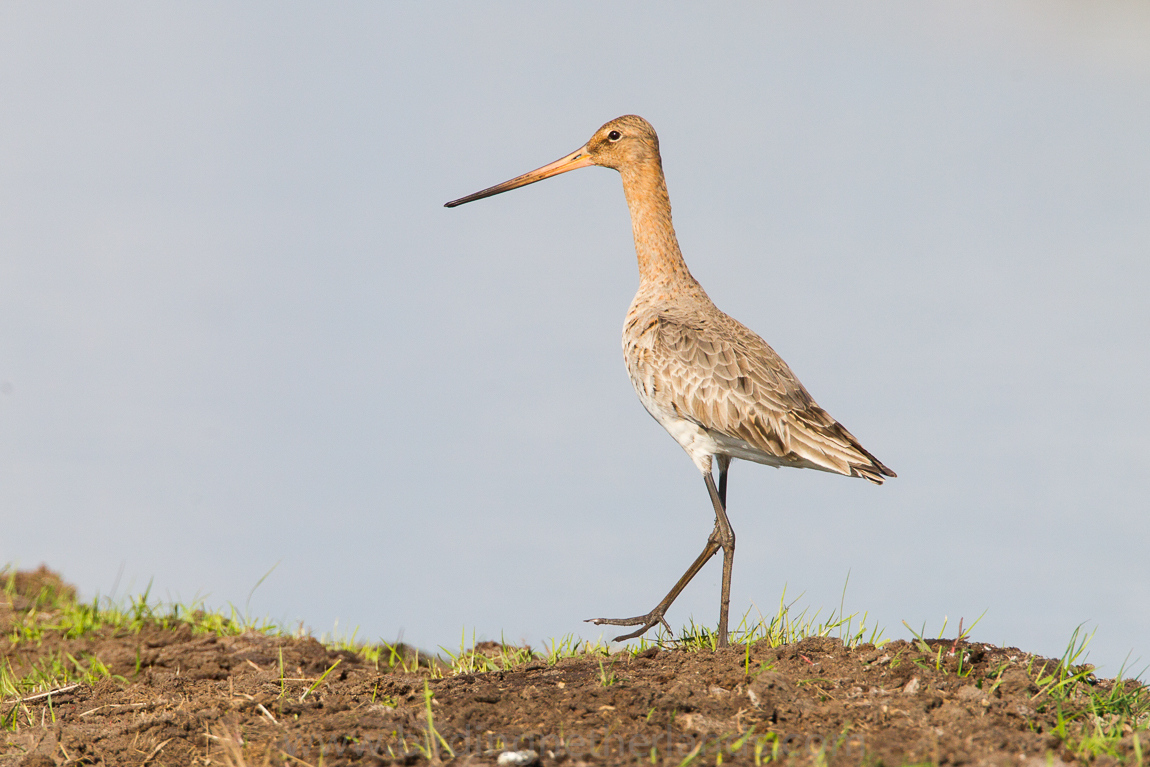 A week after I dropped of David at Harlingen where he took the ferry to Terschelling to read darvic rings on Brent Geese I saw a very happy, and sun tanned, face coming out of the ferry. He had red over 120 different rings and saw birds he also knew from the UK. He was also very surprised by the number of Black-tailed Godwits which at some time sat a meter next to him.

Before I picked up David I checked a spot and found two singing Bluethroats which he would love to see as I suggested to stop over. The males showed their display flights and sat out in the open singing their heart out. Out of the same reedbed Reed Buntings where singing, a couple of Bearded Reedlings where calling while a stunning male Marsh Harrier flew over.

As the water was rising on the Wadden Sea we stopped over at Den Oever where thousands of Curlews, Dunlins, Knots, Redshanks, Sanderling, Bar-tailed and Black-tailed Godwits of the Icelandic subspecies were resting.

Despite the good numbers of Brent we found at another site we couldn’t find any ringed birds due to the distance. As we drove up the parking lot at another side for waders a stunning Ring Ouzel was foraging on a meadow with a Blackbird and a Song Thrush. When compared to the Blackbird the wing length really stood out of the Ring Ouzel. At the wader site we added a summer plumage Spotted Redshank, Greenshank and again some very nice singing Bluethroats.

To revisit the site of the Brent from the week before turned our to be a good choise as the birds were down at the dike which made it easy to scan the flock. We did see the White-bellied Brent again and some ringed Brent but the Black Brent had left with some other Brent as the flock decreased to 2.000 birds.

We headed east again to move along the west side of the IJsselmeer towards Schiphol. A Peregrine was soaring around a large mast and in the nature reserve itself we found a pair of Garganey and two adult summer Little Gulls were picking up the hatching mosquito’s from the surface. In a group of Meadow Pipits flew a Water Pipit but the birds quickly vanished in the higher gras. From the nearby trees we heard the continuing songs of Willow Warblers and Chiffchaffs which even inspired a Goshawk to let everyone know this was his territory.

We tried to relocate the Lesser Scaup in the large flock of Tufted Ducks and Greater Scaups but failed like many other birders that day, probably because the birds stayed behind the reedbed (we told ourselves). We drove to a good area for meadow birds just north of Amsterdam. Beside the sightings of many Black-tailed Godwits and Marsh Harriers we also added Mediterranean Gull to the list by that time had grew to 97 different bird species within those two days.

Just thought I'd share with you my thoughts of my Birding trip to the Dutch Waddenese Island of Terschelling. NL

This trip is primarily organised to read Darvic rings on Brent Geese that stage in big numbers on the Island in April/ May this is major migration stop over point for many Geese that are heading North for breeding grounds in Arctic Siberia & for some their first stopover point. For the past 5 years Brent Geese have been caught &marked on the island in spring via Cannon net methods.

Firstly I contacted Birding Netherlands (Menno Van Duijn) whom kindly arranged pick up from Amsterdam- Schiphol with a pre - arranged schedule itinerary of transporting transfer to the Dutch Coast at Harlingen to board the ferry for Terschelling. This was ideal as Menno drove from the airport he took me to many places to take in the Birding hotspots on the way. Recent sightings included Baikal Teal, Red Breasted & Lesser Whitefronted Goose. I think that he must have felt it a bit odd that I expressed my primary objective was to observe Brent Geese.

With this in mind Menno soon found me lots of Geese to look through on the Dutch Coast at Den Helder & Westerland we soon picked up ringed birds & 2 Black Brant & 3 Pale Bellied in the last flocks we observed on the mainland. So my transfer from Harlingen to Terschelling came quickly in the early evening & I was on board the fast ferry crossing I was shattered after a days Birding on the Dutch mainland & was quickly asleep after taking in a raft of Eider Duck from window seat on the Ferry

Crossing was very smooth & in 45 minutes we arrived at West Terschelling Harbour. I walked from Harbour to the Hotel the West Cord very short distance which was organised as part of my deal with Birding Netherlands, it was very close. The facilities at the Hotel are excellent with fine in house dining (Michelin star - Chef) in the Restaurants & very nice bar area with a relaxed atmosphere with very friendly bar & restaurant staff. The local beer brewed on Terschelling Schoemrakker ( features a Sanderling as logo on the glass) is very crisp & very tasty.

I retired early most evenings as to make an early start for Birding the next day or should I say Brent observing!!! Monday the 27th I arranged a meet with a long term friend or fellow Brent Observer over 30 years Harry Horn whom is an islander who reads lots of my Essex ringed birds on the Island of Terschelling. I have only known him to write too & email in more recent years so was superb talking to someone with a mutual interest in Brent Geese. By mid morning I had hired a push bike for the week & had cycled the short distance to Halfweg Polder the nearest flock to my hotel. The Brent are so very tame on the island & can be observed very closely you can see the ringed birds on the outer flocks closest to the wall with the naked eye. Everyday I was treated to Black- tailed Godwit almost sitting on my lap & quite often they would sit almost an arms length away whilst I was viewing Brent from the wall.

The island has surprisingly varied habitat of sand dunes & pine belts which hold a few pairs of Goshawk which I was pleased to observe one day whilst I cycled to far end of the Island to the Boschplaat it has breeding Spoonbill these breed on the ground as there are no land predators on the islands.

Very quickly I had read many ringed Brent Geese lots of old friends that pass through Leigh on Sea in October & some regular birds I had read two weeks earlier that winter on the Outer Crouch Estuary & a bird from North Fambridge & some from the Colne too. This was amazing and a real thrill for me birds that I had read almost weekly back home here in front of me on the island

So most days I cycled nearly 15km- 18km in search of flocks of Geese & successfully 493 sightings of over 150+ individuals. It's a bit different to reading Brent Geese rings at home in the UK as mostly flocks of 1000- 2000 birds only contain 6 to 10 rings in where as flock of 1000 on Terschelling contain 65- 100 ringed individuals. So if you ever see someone cycle on the Essex Coast on large bike like Sedgewick the Manufacturer from the film The Great Escape, that'd be me. My week went very quickly as does when one enjoys the natural surrondings of doing what you love best.

Sunday the 2nd April I boarded the ferry to return to Harlingen & to meet Menno on the Dutch mainland. We birded all day picking up some nice early summer migrants Bluethroats very enchanting with display flights & calls. Lots of Geese again including ringed birds. Garganey, Little Gulls, Ring Ouzel as we made our way back to Amsterdam for my drop off at Schiphol.

Why not use Birding Netherlands for a perfect short break or stop over Birding Tour of the Netherlands. I'm very grateful to Menno Van Duijn for making my Birding trip such a memorable one. If you require any more details or are interested in Birding in Holland please do not hesitate to contact me or even better