Four days of summer Birding, Wednesday 19th until Saturday the 22th of July 2017

Marie takes a special interest in waders. Well the wetlands of the Netherlands have enough of those, so we visited the delta and Wadden Sea. She likes observing birds on an easy pace, just enjoying the birds in their habitat. The scenery, the historic buildings like farms and windmills were also worth to visit or to be photographed

Day one we went straight to the Wadden Sea in the North of Holland for there are lots of waders to be seen there. We waited till the tide came in. Greenshank, Common Redshank, Common Sandpiper, Ringed plover and Eurasian Spoonbill were already close by. Groups of Spotted Redshanks were to be observed within 40 meters, some of them still had their black summer plumage.

The upcoming tide brought us groups of Eurasian Oystercatchers, Bar-tailed Godwits, Dunlins, Common Shelducks and some Red Knots in their red summer plumage. Here we saw a lonely Brent Goose. In a couple of month there will be thousands of them. And of course we enjoyed the typical sounds of hundreds of Oystercatcher and Common Terns. A sound you will never forget.

A new phenomena are the inundated pieces of agricultural land. They work like a magnet on waders and waterfowl. They appear every year on a different spot, but we found one. In beautiful late afternoon light we observed very close by hundreds of Ruff and Lapwings. One could easily study the difference between Wood Sandpiper and Green Sandpiper or Common- and Spotted Redshank. And in late afternoon light the colour of 15 Ruddy Shelducks is at its best!

We paid a visit to a marshland for there was a Little Stint and Little Ringed Plover to be added to the list of waders of Marie Louise. In the surrounding area of the marshland we experienced a very exciting birding moment: a Black Stork among 5 White Storks! The Purple Herons here also did not let us down. In the meadows a gathering of 5 Mediterranean Gulls with 10 fledged chicks among 50 foraging Ruff.

In the right time of the season the province of Zeeland ais the place to be for watching waders. Cruising along the dikes we saw great flocks of Eurasian Curlew and Bar-tailed Godwit on the important refuge during the high tide. Amongst them we found a Grey Plover, Red Knot, Dunlin, Pied Avocet, Eurasian Spoonbill, Little Egret and Black-necked Grebe. On the stone structure of the dams we approach Eurasian Whimbrel, Eurasian Curlew and Ruddy Turnstone within meters.

While having our breakfast on the dike of the Wadden Sea, together with the sheep, we had great views on Curlew Sandpipers that still had their beautiful reddish summer plumage. But so had the great flocks of Bar-tailed Godwit amongst the hundreds of Common Shelducks and Eurasian Curlews.

The area of the Lauwersmeer is famous for its number and diversity of waders, especially the recorded rarities. On the borders of the Lauwersmeer we admired an adult White-tailed Eagle in a clear blue sky with snow white cumulus clouds. With the sunlight right through its white tail while it flew straight over our heads. Stunning!

Thousands of waders were to be seen. Lots of Ruff, Black-tailed Godwit and Greylag Geese. We had a very good look on several Little and Temminck's Stints, Little- and Common Ringed Plovers, a Common Snipe and a Marsh Sandpiper! But the jackpot was a LONG-BILLED DOWITCHER!!! However, for Marie Louise this wasn’t here highlight. She came for the Black-tailed Godwits and saw it in summer, juvenile and already in winter plumage.

She was astonished by the synchronic flight show of around 500 Pied Avocet due to the White-tailed Eagle that passed by. After 1100 km and 107 species yet another happy birder left our country with the intention ever to come back. 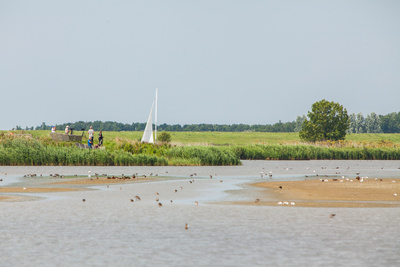 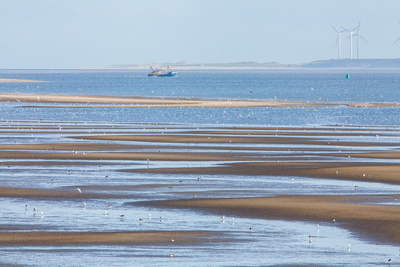 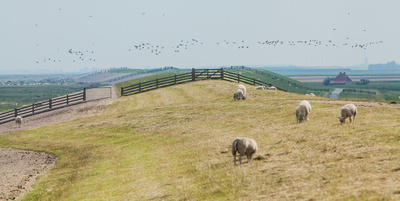 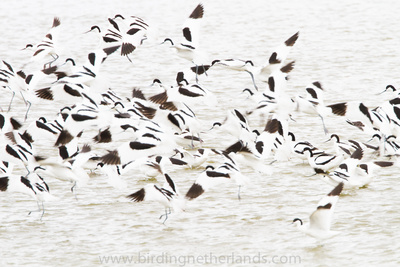 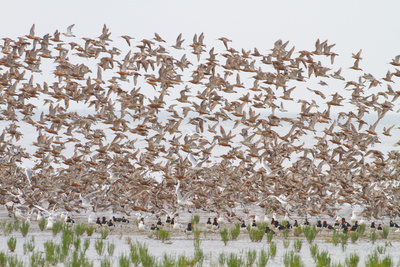 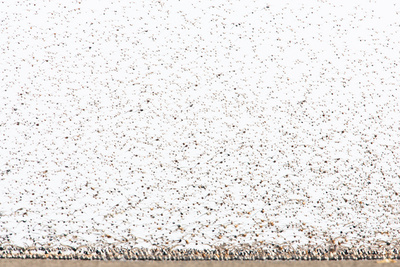