Birding in The Netherlands

The Netherlands (or Holland as it is sometimes called) is one of the smaller countries of the European Union and the currency is the euro. It lies west of Germany and north of Belgium with the North Sea to the west and north with 451 kilometers of shoreline. The capital is Amsterdam with Schiphol airport next to it. There are almost 17 million inhabitants living on 42k square kilometers divided over 12 provinces. 18% is water and majority of the country lies below sea-level.

The Netherlands is mostly formed in the last 150.000 years ago after the ice age. Fisherman often find remains of Mammoths, Bisons and wild horses that lived on the grass plains what now is the North Sea. When it got warmer and the ice melted the sea level rose covering most part of the Netherlands (c 10.000 years ago). At that time there were a lot of tidal flats, estuaries, and marshlands rich in wildlife. The higher parts where covered with trees like birch, willow, beech & oak. After people evolved from hunters and gatherers (c. 8.000 years ago) to farmers, fisherman and traders these woodlands where cut for boats, houses and other purposes (c 2.000 years ago, Roman era). Holland actually means Holt-land freely translated to wood land. In more recent times people found out how to create land using dikes, canals and windmills (c 1.000 years ago). More (cultivated) land was won from the sea with closing of the IJsselmeer in 1932 and the creation of the province of Flevoland finished in 1968.

Nowadays the majority of the Netherlands are cultivated meadows and fields which give the overall flat impression. In the east, south and central is a more varied landscapes with mostly mixed woodlands. Along the coastline is a stretch of dunes landscapes. In the villages and cities are plenty of parcs, canals and ponds which are attractive to wildlife. In the north is the Wadden Sea which is a tidal mudflats with a similar landscape in the south west in the province of Zeeland. The highest point in The Netherlands in in the south east with the 323 meter high Vaalserberg compared to the lowest point in the west with 7 meters below sea-level. 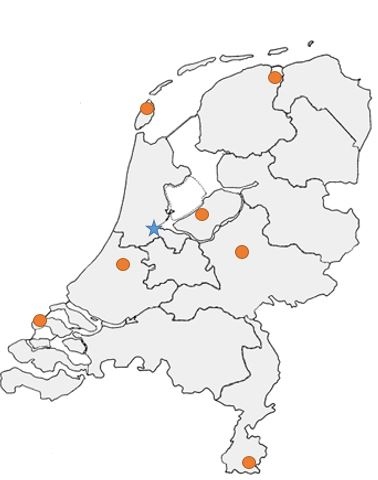 The Netherlands has a so-called sea climate. This means temperate winters and cool summers. The North Sea has a major influence on the climate with often local differences to the coastal and inland parts of the country. With an annual 1600 of sun hours and 8% downpour it's quiet often misunderstood perception that The Netherlands is a grey and wet country. The Netherlands has four seasons with complete differences. In winter the average temperature is just a couple degrees above zero and rises in spring to an average of 12 degrees. In summer the average temperature goes up just under the twenty degrees and falling down in autumn to 10 degrees.

Due to the effect of the last Ice Age, with the icecap covering half of The Netherlands it's a relative poor country in it's biodiversity. The largest nature reserves are the Wadden Sea, the coastal dunes and Hoge Veluwe. There are over 500 species of birds recorded by the Dutch Birding Association, about 50 species of Mammels by the Mammal Association and about the same number of butterflies. Many organisations are actively protecting and also creating new nature reserves with the Oostvaarderplassen as one of the largest.

The Netherlands has lots of museums with most famous art-works in the Rijksmuseum and the Van Goghmuseum in Amsterdam and not to mention the Natural History Museum Naturalis in Leiden close to The Hague. The Netherlands is also well known for it's bulb fields in and near the Keukenhof and the water management by using windmills f.e. at Kinderdijk.

You don't have to expect a rich local cuisine for Holland is not known for any food tradition. Restaurants are a mix of French, Italian and Asian cuisines. The only local/traditional food is (Gouda) cheese, fresh herring, pancakes, stroopwafels and fried snacks.

Cycling is the most common way of transportation on short distances for the Dutch and one own at least two bikes. Still it's not the most popular sport which is football. When the temperature drops below zero the nation gets nervous and hoping for the ice it thick enough to skate on and the fanatics hoping for the ultamate ice-skate event the elfstedentocht.

The Netherlands is a wealthy country with highly developed economics mainly focused on international trading (many HQ in Amsterdam and The Hague) and transportation with the largest ports (Rotterdam) in Europe and airport Schiphol. About 11 million tourist visit The Netherlands mainly to Amsterdam and area to visit the museums, bulb fields and delta works. Amsterdam is also number six in the world for congress centers.

Because transportation is important for the economy The Netherlands has dense but high quality infrastructure of roads, rails and canals. Because of being a dense populated area, especially near the cities, these networks can be under stress at some times taking longer time to cross the relative short distances.