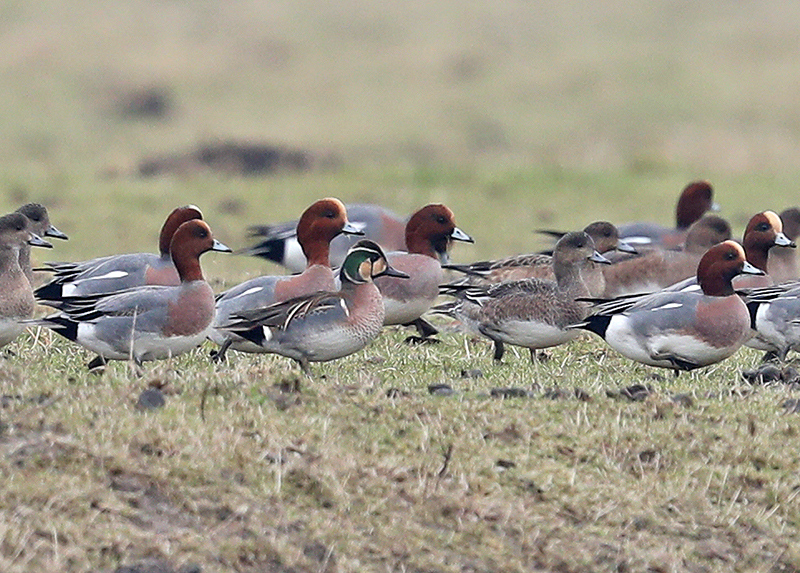 THE DISCOVERY OF THE 13th DUTCH BAIKAL TEAL FOR THE NETHERLANDS

At 12:45 on February 4th 2007, a car stopped at the quiet little ‘Leeweg’ road, just outside the small Dutch coastal town of Noordwijkerhout. Why would a car stop there? Suspicious! I will explain…

My girl Nina is a professional photographer and always looking for new inspiration. She heard of an old and deserted boat lying in the grassy polder. It seemed like an interesting opportunity for her. We needed an excuse to get out of the house, which we were able to combine with a midday car sleep of our two year old son Bodi. On the way to our goal I saw a large group of geese from out of the car. The day before I also spotted them from the highway and forgot about it. Wild geese on the ground are quite rare in this region, so I took my chance by checking them out with my telescope, which I coincidentally just threw in the car a few days earlier. Unfortunately the geese turned out to be exotic ones, Egyptian and Greater Canada Geese. I did see a handful of Tundra Been Geese, a good species to see on the ground here. Even more exciting was a group of several tens of Eurasian Wigeons feeding in the grass. I know this species especially from the sound they make during their nighttime migration. Studying a group of these ducks on the ground at good scoping range is a great chance for me to check if there is a vagrant species among them, like American Wigeon or even Falcated Duck. Scanning such a group is what my hobby is about, having a chance to find something rare. Not even half a scan, I recognized a drake Baikal Teal because of its typically patterned elongated shoulder feathers. I had to wait very shortly for the bird to lift his head and show me I wasn’t crazy. A great moment to see the characteristic head pattern of one of the most beautiful Ducks existing on my planet. I could also see that the legs were unringed, unlike one would expect in an escaped cagebird scenario. I immediately turned myself to Nina, who was still sitting in the car. As usual when I’m very serious about a bird, she was perfectly cooperative and followed my emergency instructions without any difficult questions.

‘’I’m seeing a very rare vagrant, a Baikal Duck and I need you to photograph his legs to prove there are no rings’’

Nina grabbed the old camera with telelens from my ‘birding backpack’ and followed my directions. The bird was too far away so Nina tried her own camera through the telescope. I used this time to report this unique sighting to some local whatsapp groups and after that on www.waarneming.nl to reach a larger public. Just after a few minutes the first birders arrived on the spot and the rest is history. My job was done, I found the 13th record of Baikal Duck for The Netherlands and only the 5th living bird. I just wanted to wait a while to convince the very few photographers to capture the unringed legs and advised them to get closer to the bird by using another road through some woods. Bodi was really in need for his sleep and didn’t like the stupid shawl I threw at him with the accompanying text to use it as a toy. Nina drove him home and after a while I walked to them with my telescope on my shoulder. A walk of just fifteen minutes with a big smile on my face. After a Hume’s Leaf Warbler, this was the second rare bird I found in my hometown this winter, without doing much effort and in both times with a kid on the backseat. It gives a birder an addictive feeling of being extremely lucky.