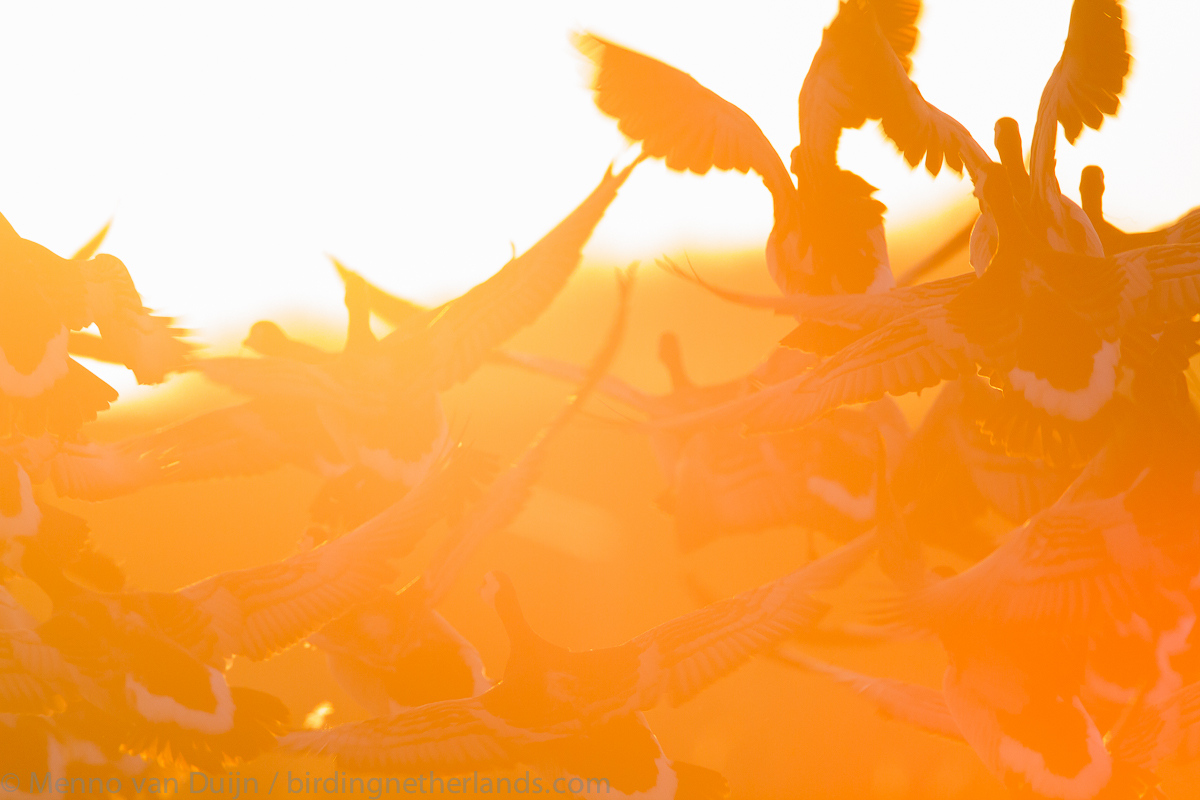 Gary Kramer contacted us as he's working on his Wildfowl of the World Photo Book. This project is going to take him three years to photograph all the wildfowl (ducks, geese and swans) of the world. As the Netherlands is one of the best places to photograph European species of wildfowl he had to visit the Netherlands. He chose us because he was impressed by the quality of the photos on our website and was convinced we could help him to get the best photos as possible.

We were honored by this but also felt the pressure ;) We arranged the B&B, guide(s) and could even welcome him a day earlier (because of the good weather forecast) at the last moment which he didn't regret. So on Wednesday 7th of February our guide Joost picked him up for a week of wildfowl photography.

7/02
First day we went to the area of Zoeterwoude. This is area is called the “Green Heart” of the Netherlands as it mainly consists of meadows. It’s an area were thousands of Eurasian Wigeons come to winter. During the day you can find them in the canals and lakes but at night they go out into the polders to graze. As lot’s of the canals were frozen we found a couple of flocks next to the road and from the car we could photograph Eurasian wigeon right next to us in perfect light Beside the Eurasian Wigeon we also found Smew, Bewick’s Swan and Northern Pintail.

08/02
This day we went to the southwest of the Netherlands to the Dutch Delta. OUr target for the day were Dark-bellied Brent- and Barnacle Goose. Once we found the huge flocks we stayed all day until dawn. Allowing Gary to take thousands of images of the geese. Portraits, flying, disputing and flocks in their environment.

Gary Kramer took a special interest in our brent geese. As a biologist he is an expert in this species. In America he studied on the white-bellied brent- and the black brent goose. Both scarce species in the Netherlands but in his homeland abundant. To observe the dark-bellied brent in huge flocks he had to find their wintering grounds in the Netherlands. Because of his study he can read the behaviour of geese and could approach them very close.

09/02
Just south of The Hagea, near Delft, there are a couple of hundred wintering Pink-footed Goose returning here every year. Only due to the cold the majority of the flock probably headed further south (to Belgium) and the remaining birds where far out and in bad light conditions. Still we had some more Barnacle and Greater White-fronted Geese being more cooperative.

In the afternoon there was a warning of a snow storm (code orange) so off we went again to the Brent in Zeeland. After riding through the blizzard we enjoyed the geese for a couple of hours in winter weather only 15-20 meters away from the car. So within three days three species were off the list and the Bean Goose where the only target bird left. Now that looks like a piece of cake after so much success but the bean is quite a different chapter.

10/02
Day four we checked out the Wieringermeer in the top of the province Noord Holland. The area was completely without bean geese! It seemed they had been hunting Hares there the last few days and disturbed the Bean Geese as we were told by some local birders.

Luckily there are more Dark-bellied Brent to be found here so we still had some birds to photograph this day. There was a Black Brent among the Dark-Bellied but that was of no interest for Gary. At home he sees thousands of them. On our way home in the last light we finally found a flock of Bean Geese. But they were far out and there was no chance for any good photos. 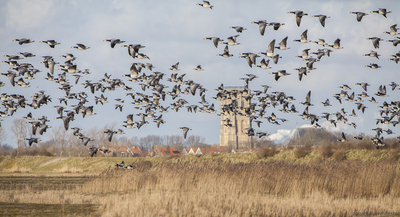 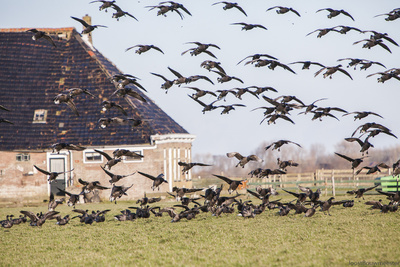 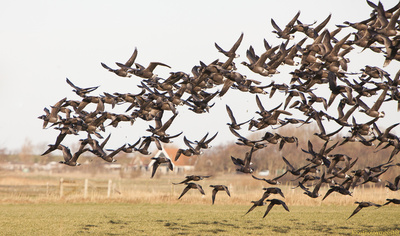 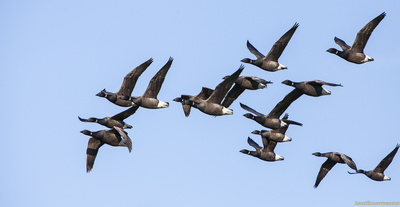 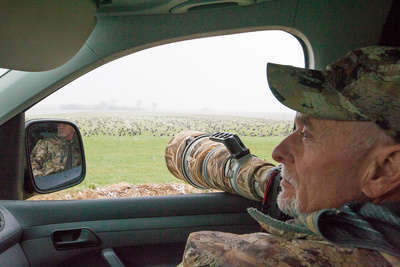 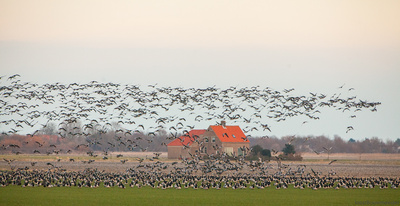 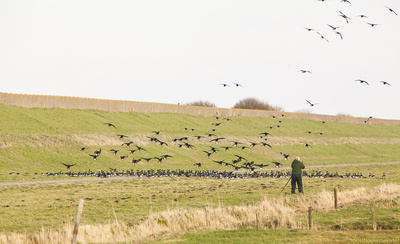 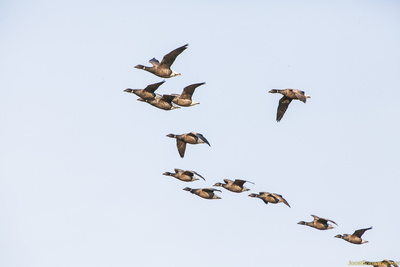 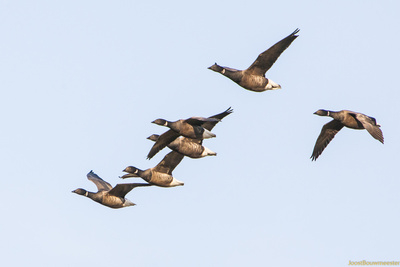 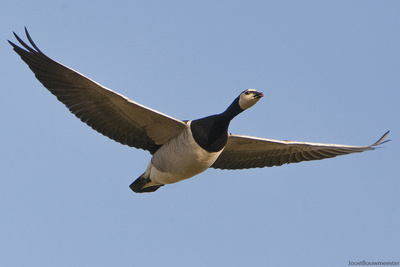 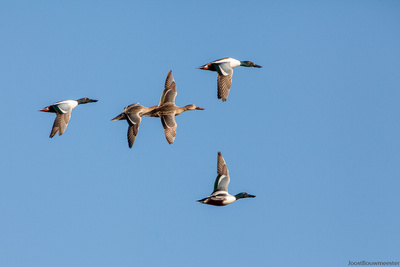 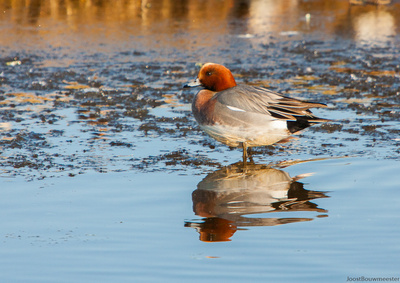 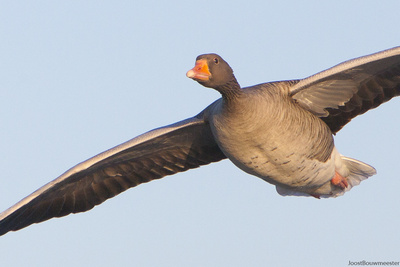 Today Gary and I (Menno) went to the east corner of the Netherlands to start at a roost of 6.000 Tundra Bean Geese. The birds left while it was too dark to take any photos so we followed the flock into the direction they headed. We found about 250 birds in a field mixed with some Greylag en a couple of Egyptian Geese. We turned the car a bit further down the road and Gary got in the back seats so he had both sides to photograph from. We drove slowly but before the car came to a stop the birds took off. Not such a great start but we had the whole day ahead of us.

Half an hour later we found about 2.500 birds on a meadow behind a farm. We asked the owner if we might enter his terrain and got permission. We slowly moved behind the barn and the flock was about 100 meters (300 feet) away from us. Step by step we could get closer to about 60 meters (a ditch was in our way). More groups of Bean and Greater White-fronted Geese arrived and we managed to get some good flight shots despite the poor, dark, grey weather (even some rain). After two hours the group took off. And when we got in the car it really started to rain.

We drove around an found some more smaller groups of Bean Geese which we were able to photograph. A group of swans turned out to held all three of the species (Mute, Whooper and Bewick's) and a Common Buzzard was feeding on a Stock Dove it had caught. Some other nice birds we saw where a Peregrine, Rough-legged Buzzard and a flock of Yellowhammers.

The previous day we got photos of the Bean Geese in flight and the foraging flocks but didn't get the portrait shots as they were very shy. So we scanned the internet and tried our luck east of Rotterdam. Again some good numbers only all far out in the fields so after some time we went to another site which was not even an hour away.

Exactly at the same field we found the geese foraging on Sugar Beets which were leftovers from the harvest. There were about 3.000 Bean Geese, 200 Greater White-fronted and 100 Greylag. Again we Gary settles himself in the back seats so he has all the space and both rear windows to photograph from. We slowly drive towards the flock as they are very close to the road. It all goes well until…. Another car takes the some road towards us and decides to stop next to the flock to let us pass…… All the geese take off :( But luckily they return only not as close as before.

We waited and waited, hoping that the geese will get closer only they rather sleep then move. Meanwhile we also scan the flock and within Greylags we noted some birds with pink beaks and legs instead of orange. These are birds from Russia of the subspecies “rubrirostris”. Also they more grey colour, broader tips of the covers and the more marked flanks are positive for this subspecies.

We head west to try our luck at the Brouwersdam for Common Scoter but they are a too far for good photos. But a male Red-breasted Merganser is more cooperative. We end with sunset with some Barnacle Geese to end the trip with.

We head back with a very happy client. Beside being a very good photographer Gary had a good sense of humor and this was a trip to remember. We wish Gary all the luck with his project and can recommend his website, books and hope some photos will feature his book that will be published in 2021/2022. 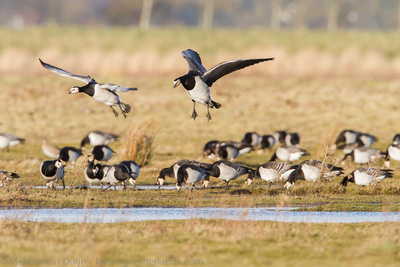 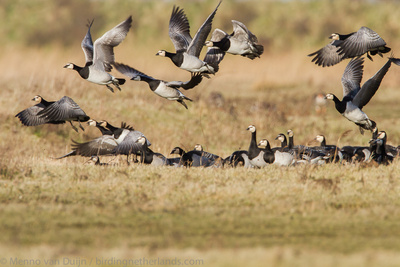 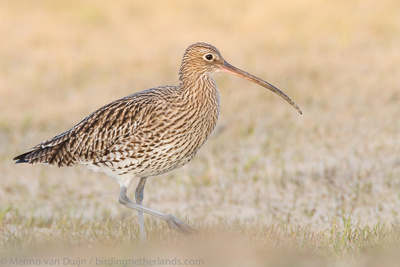 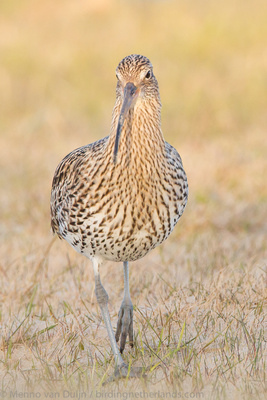 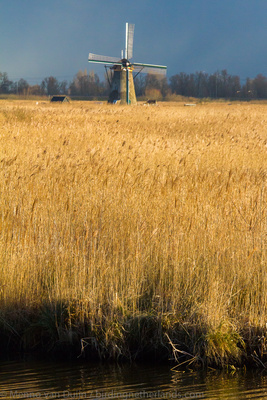 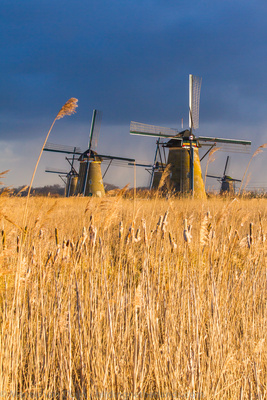 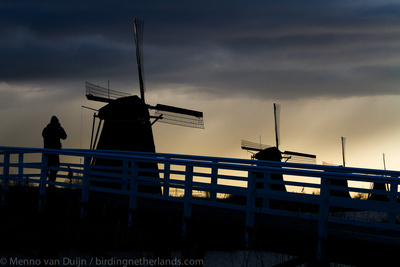 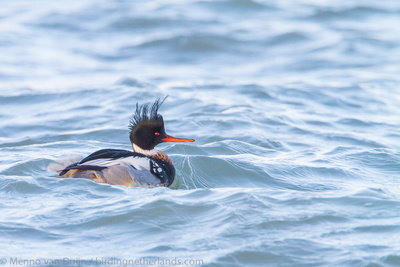 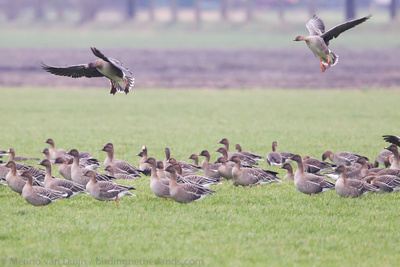 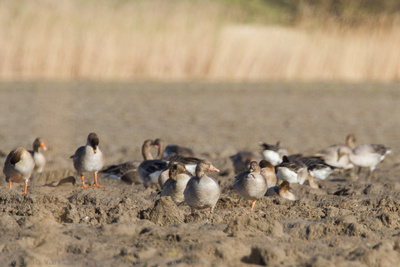 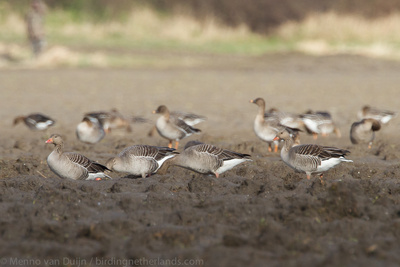