Sunday 22/4/2018
It's early in the morning as I (Menno van Duijn) drive into the center of Amsterdam and after some roadblock I reach Daniel´s hotel. Not only are the Herring and Lesser Black-backed Gulls active but I get confirmed why I don't like being in a city: frustrated Taxi drivers and grumpy people.

Luckily we arrive at a parking lot after a half hour and are welcomed by displaying Black-tailed Godwits, singing Savi’s Warblers and a male Ruff lands near the car as we step out, too bad that it vanished when Daniel got his camera and lens out of the car.

While the sun it getting over the horizon we walk into the wetland. Thousands of Barnacle Geese are still present and the Greylag Geese are walking around with their first hatchlings. Black-tailed Godwits, Northern Lapwings and Common Redshanks are displaying in the air and a mix of Black-headed, Common, Herring, Lesser Black-backed and some Mediterranean Gulls forage in the meadows.

From the reed we hear and see Sedge and Savi’s Warblers and in the distance a Bluethroat. Suddenly a Great Bitterns flies out of the reed! Northern Shovelers are chasing females on the lake where a flock of Avocets are standing in the water for a moment before an adult Greater Black-backed Gull scares them off.

We drive around the fields to photograph the Common Redshanks, Eurasian Oystercatchers, Black-tailed Godwits, Meadow Pipits and a Common Tern let us take a set of photos while displaying for his partner that flew by.

Daniel’s wife wanted to see the Zaanse Schans so I park the car within all the touring cars and wait for them. After that we head to Den Oever and a hour later we are sitting on the dike in the sun overlooking the Wadden Sea were the waders are roosting at the high tide.

Yellow Wagtails drop on the grass next to the grazing sheep to catch some insects before the continue their migration while suddenly I hear a “sparrow-like” call and see a larger pipit flying by with sand coloured underparts with no striping, a Tawny Pipit flies by with some Meadow Pipits!

The flock of waders in front of us, still a bit far out for any photos, is a mix of summer plumage Bar-tailed Godwits, Dunlins, Red Knots, Ringed Plovers, many Common Redshanks with a couple of Spotted Redshanks and Avocets. In the background we see small flock of Little Gulls on migration.

The sky is full of Barn Swallows, Common Swifts and House Martins that suddenly are scared by a passing Hobby. As we have lunch on the dike we see more raptors passing by like Common Buzzard, Eurasian Sparrowhawk, Marsh Harrier and a Black Kite!

We head westwards and take the touristic route to check some sites. It’s a warm sunny day so there are a lot of cyclist why we only are lucky to have a pair of Grey Partridges next to the carr, all other birds are far out in the fields.

At another bird observatory point we have a large flock of Eurasian Oystercatchers and Common Redshanks right in front of us who are joined by a Northern Lapwing and a Yellow Wagtail drops by. A (distant) Northern Pintail is a lifer that was on his wish list. On the North Sea dike we find Ruddy Turnstones and a couple of Purple Sandpipers foraging on the blocks which we can approach within a few meters. Over the calm sea a couple of Eider, Great Cormorants and Sandwich Terns fly by and a Common Seal pops up his head.

We slowly head south passing the colourful flower fields and stop at a birding spot for a Marsh Sandpiper in summer plumage with the setting sun in our backs. A stunning male Pied Wagtail is hunting insect together with White and Yellow Wagtails. On the water Northern Shovelers are spinning around to stir up the mud from the bottom and Eurasian Teal are dabbling in the shallows.

Monday 23/4/2018
Today we head to the southwest of the Netherlands which is good for coastal birds. We arrive at the Brouwersdam were it’s cold and windy (like most of the time). It’s high tide and we drive slowly along the edge. We find a Whimbrel in a flock of Eurasian Oystercatchers and later a group of 50 Sanderlings, some almost in summer plumage.

All the wintering grebes, sea ducks and divers seem to have left their wintering areas as we can’t find any.

At the Prunjepolder we park the car where a Common and Lesser Whitethroat are singing. A group of Ruff (starting to get their summer plumage) fly off when a Common Buzzard flies straight over our heads.

On the lee side of the dike we get some views of Northern Wheatears, Linnets and Goldfinches.There’s a flock of Bar-tailed Godwits and Grey Plovers far out, the tide is getting our so we decide to wait for them to head out to the mudflats. We have a coffee and some biscuits and precisely when we finished this we flock takes off (because of a male Marsh Harrier) flying by at the exact line we hoped for.

Later we also spot a hunting Marsh Harrier and after we quickly turned the car we are able to follow it for a while as he’s flying parallel to the car. Daniel gets some great shots of this bird!

In the afternoon we visit a colony of Eurasian Spoonbills but the wind is not from the right corner so their not flying in as we hoped for. Still we get some shots especially from the Great Cormorants carrying nesting material.

Our last stop is at a forest close to the B&B were they are staying where a Wood Warbler has been reported and is showing well. We hear the bird calling actively when we arrive and after a couple of minutes it comes down from the treetops to forage in the sprouting leaves of some smaller trees. We get some nice views and photos in the last light of the day and get some other shots of Blue Tits and a Robin. The following day they visit the Keukenhof and are in the hands of Joost for the following two guided days of their stay 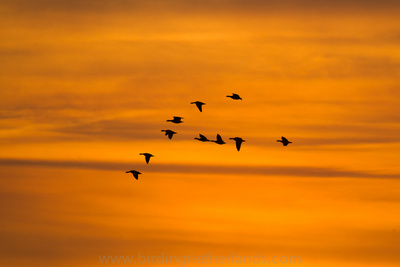 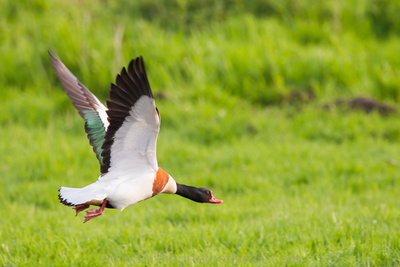 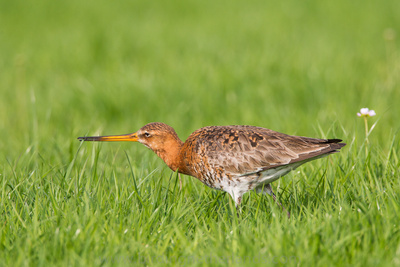 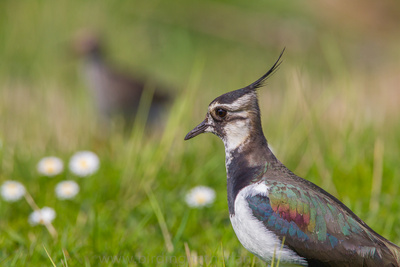 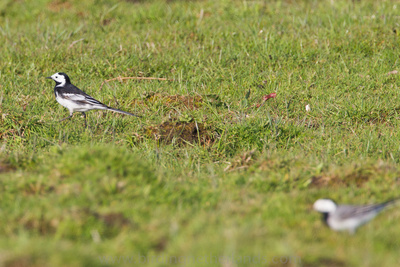 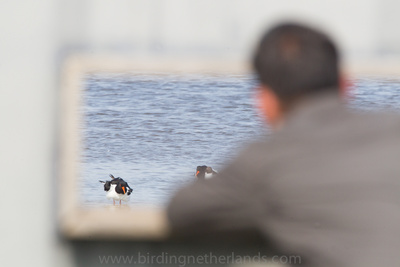 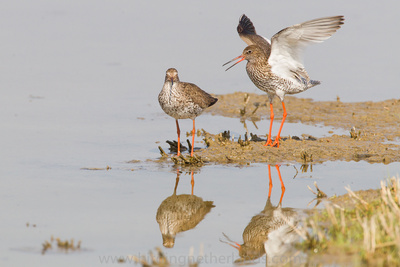 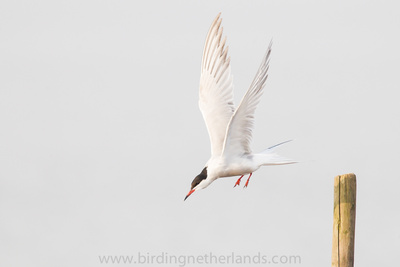 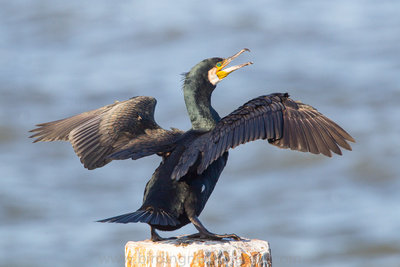 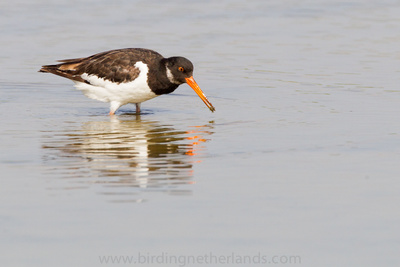 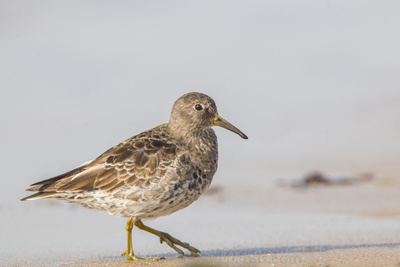 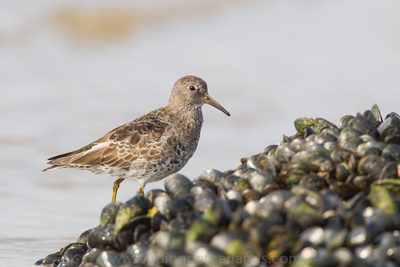 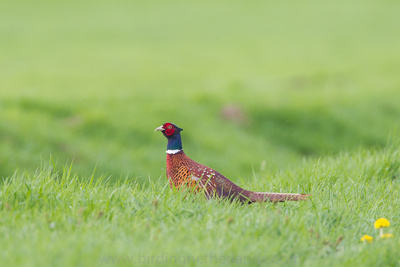 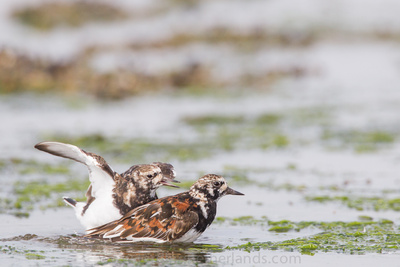 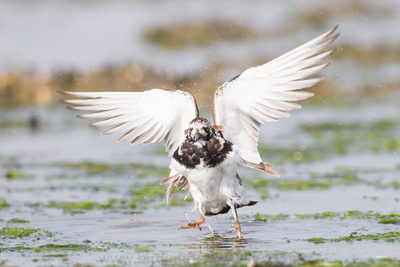 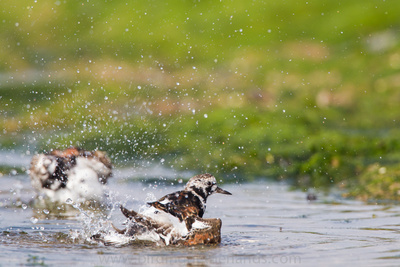 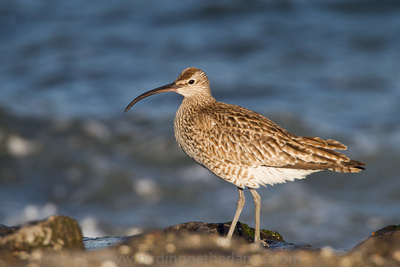 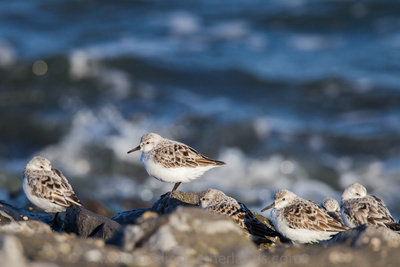 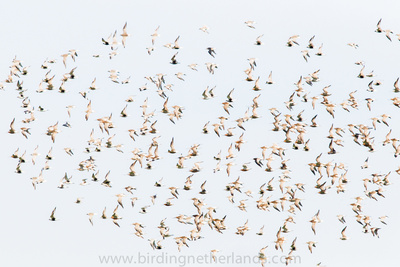 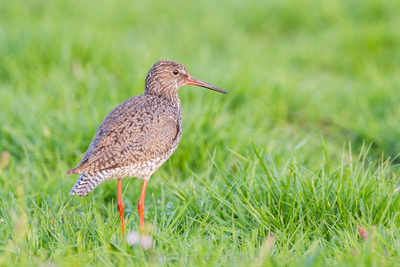 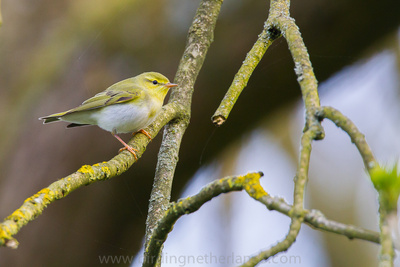 The weather had changed to more typical Dutch weather. Grey, windy and cold. This is something completely different then the 30+ sunny weather they are used in Singapore.

Because of this we started in the more sheltered pine forest in the dunes close to The Hague. The fresh arrived summer migrant aren’t bothered by this as they are singing out loud. Species like Common and Lesser Whitethroat, Nightingale, Common Redstart and Wood Lark clearly had one thing in their mind, sing!

We tried to get views of a speciality here the Crested Tit but we failed to get some views, the bird kept calling high from the pines tops. Other tits like Great-, Blue-, Willow- and Long-tailed Tit were more easy to see.

Next stop was another forest were the birds are used to people walking around and therefore less shy. Here we found nesting Stock Doves that are using the old nest of Greater Spotted Woodpeckers, as do the Ring-necked Parakeets and Nuthatches that adapt the entrance by adding clay. We also found a nest of this woodpecker itself.

After dinner we drove around in the fields hoping for Yellow Wagtails on the tulips but for that it was to windy. Instead we got Skylarks, Northern Wheatears and another Whimbrel.

Thursday 26/4/2018
The rain had moved on but the wind was still blowing fiercely. Not ideal when you’re planning to photograph marsh songbirds in the reed. Either way we tried our best because the light was just perfect.

The Reed-, Savi’s- and Sedge Warblers kept on singing only stayed low and more hidden in the reed. At calm days the often climb up to sit at the top. Even the Bluethroats kept low and didn’t perform any display flights.

So it was up to the larger birds. We did get lucky with a male Ruff in summer plumage, a Black Tern and Greater Scaup some more Northern Pintails and Eurasian Wigeons.

At the end of the day Joost brought them to their hotel in Amsterdam so they could be ready and prepared for the greaters and crazies dutch event, Kings Day!